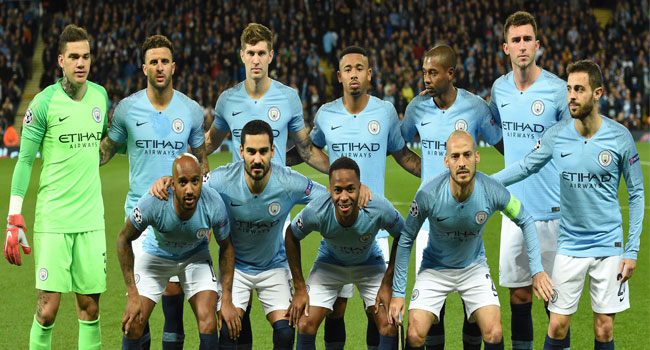 Manchester City’s fourth consecutive Champions League defeat is a stark reminder of the size of the challenge facing the Premier League champions as they seek to replicate their domestic dominance on the European stage.

Pep Guardiola’s richly talented team are among the favourites to be crowned kings of Europe after racking up 100 points in the Premier League last season.

Yet their limp 2-1 loss to Lyon on Wednesday played out in front of swathes of empty seats in Manchester, prompts the nagging question of when the fans and the players will come to terms with the demands of the Champions League.

Guardiola’s absence from the touchline and dressing room at half-time due to the suspension was highlighted as one of the factors for City’s loss.

But whatever excuses are made, the stark reality is that they are the first English club to lose four straight games in the competition — three of them at home.

While other contenders such as Liverpool, Real Madrid or Juventus can count on the home advantage of a fervent atmosphere on a European night, the competition still does not appear to have captured the imagination of the club’s fans, with 15,000 empty seats at the Etihad for Lyon’s visit.

“It is not the fault of an empty seat that Fabian Delph misses his kick at a vital moment, yet when one recalls the atmosphere at Anfield the previous night and the way Liverpool swept Paris Saint-Germain aside, one cannot help but compare it to City’s own European experience,” wrote Martin Samuel in the Daily Mail.

“While Anfield’s sound and fury inspired an almighty level of resistance against PSG and propelled Liverpool to a late victory, City played like their ground looked: underwhelming and slightly absent.”

“Obviously, the ideal scenario is to have a full stadium every time and to have people supporting and getting behind the team like crazy,” said assistant manager Mikel Arteta, who took charge in Guardiola’s absence.

“I wouldn’t like to use that as an excuse because we had this type of crowd in Champions League before and we were able to win the game.”

In Arteta’s words, City is now used to the problem.

However, it remains a significant handicap to their chances of winning the competition, even if they should still have the time and quality to recover from Wednesday’s uncharacteristically error-strewn display and progress from the group.

Champions League success remains the holy grail for the club’s Abu Dhabi owners a decade after their transformation of the club’s fortunes.

City has never won Europe’s premier club competition — their semi-final against Real Madrid in 2015-16 is the furthest they have gone.

Last year they lost both legs of their quarter-final to eventual finalists Liverpool, crashing out 5-1 on aggregate.

Among the theories as to why City fans are not captivated by the Champions League is a lack of history in the competition before the Abu Dhabi takeover, meaning there are few memories of great European nights.

Another reason given is UEFA’s sanctioning of the club over the breaching of Financial Fair Play regulations in 2014, which has seen the Champions League anthem before the game booed ever since.

“Today the stadium is not completely full so the only thing we can do is play well so the people at home say ‘wow, next time I will be there’. We have to be so proud to play in this competition,” Guardiola said after his first home Champions League game two years ago.

His side has done plenty in the Premier League to wow their support since. As a disgruntled Guardiola looked on helpless from the stands he must wonder what more he can do.