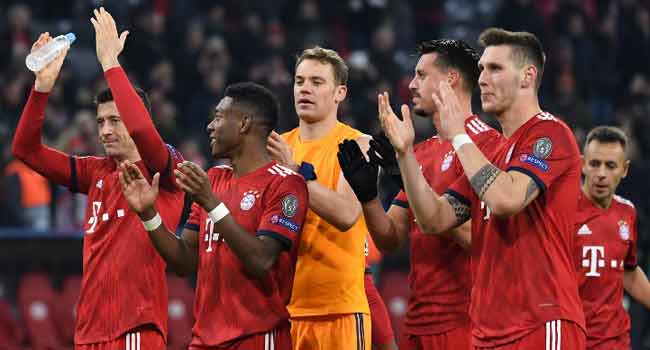 Bayern Munich romped to an emphatic 5-1 home win against Benfica on Tuesday to qualify for the Champions League last 16 and ease the pressure on coach Niko Kovac.

Arjen Robben and Robert Lewandowski both scored twice before Franck Ribery completed the rout at the Allianz Arena after Gedson Fernandes had netted Benfica’s consolation.

This is the 11th season in succession Bayern have reached the last 16 of the Champions League.

While Bayern sit just fifth in the Bundesliga, they are flying in Europe, having now chalked up four wins and a draw in the Champions League’s group stage.

They need just a point at Ajax in a fortnight to win Group A, while the best Benfica can hope for is third and a place in the Europa League knock-out phase.

Bayern were unrecognisable from the team which leaked goals in a 3-3 draw with Bundesliga strugglers Fortuna Duesseldorf on Saturday.

Bayern went ahead after just 13 minutes when Robben produced a stunning piece of skill for his 30th Champions League goal.

There was nothing on when the Dutch veteran darted through three defenders on the right wing, cut inside another and hit the top left corner with a superb shot.

The 34-year-old doubled Bayern’s lead by wrong-footing Benfica defenders German Conti and crashing his shot past Odysseas Vlachodimos on 30 minutes.

The third goal followed six minutes later when Lewandowski rose highest for a corner and steered his header into the net via the post.

It was the Polish star striker’s 50th Champions League goal.

It was 3-0 to Bayern at the break, but it could have been 5-0 as Vlachodimos had to twice palm shots away by Thomas Mueller and Lewandowski.

However, the defensive errors which have blighted their recent performances returned to haunt Bayern straight after the break.

Benfica boss Rui Vitoria brought on Portugal international Gedson Fernandes for the second half and the teenage midfielder took just 48 seconds to score.

Gedson sprinted onto a through pass and finished off a counterattack by slotting past Manuel Neuer to stun the hosts.

Ribery capped a gala night with an exchange of passes with David Alaba to slam home Bayern’s fifth 13 minutes from time and claim his first Champions League goal for more than three years.