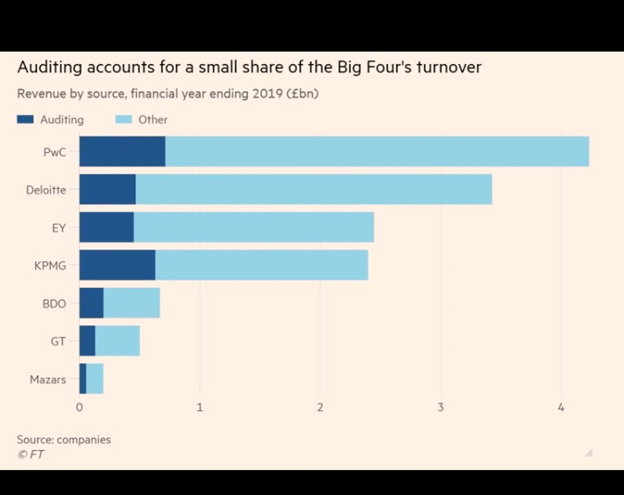 The Financial Reporting Council has issued a 22-point plan for the operational separation of the audit units o PwC, Deloitte, KPMG, and Ernst & Young-The Big Four Accounting firms. In what could be termed the biggest shake-up of the industry in decades, the Big Four Firms must outline how they will implement this new directive by end of October and have until June 2024 to effect such changes.

The Big Four have come under intense scrutiny following the collapse of high-profile corporates and recently the German Payment processor, Wirecard where $2billion have been declared missing, while Ernst & Young, its auditor is accused of missing the alleged Wirecard Fraud.

The new FRC’s plan seeks to ensure that firms pay auditors in line with the profits of their audits, shielding the finances of the audit division with a separate profit and loss account and introduce an independent audit board to oversee the practice.

As at 2019, the Big Four generate about a fifth of their revenues from the audit practices which have been dwarfed by the rapid expansion of their advisory division in recent years. Analysis of audit fees of Nigeria’s most capitalized firms on the nation’s bourse show that the Big Four earned the sum of N7.53billion as audit fees in 2019.

By the time the operational separation officially takes effect starting from June 2024, FRC said it would be expect that audit practice governance would prioritise audit quality and protect auditors from influences from the rest of the firm that may try to divert their focus away from audit quality;  the total amount of profits distributed to the partners in the audit practice does not persistently exceed the contribution to profits of the audit practice; the culture of the audit practice which prioritises high-quality audit by encouraging ethical behaviour, openness, teamwork, challenge and professional scepticism/judgement; auditors act in the public interest and work for the benefit of shareholders of audited entities and wider society.

While commenting on this development, FRC’s Chief Executive Officer, Jon Thompson, said the FRC is committed to reforms on how corporate finances are reported. Further aspects of the reform package will be introduced over time, he said

“Operational separation of audit practices is one element of the FRC’s strategy to improve the quality and effectiveness of corporate reporting and audit in the United Kingdom following the Kingman, CMA and Brydon reviews. Today the FRC has delivered a major step in the reform of the audit sector by setting principles for operational separation of audit practices from the rest of the firm. The FRC remains fully committed to the broad suite of reform measures on corporate reporting and audit reform and will introduce further aspects of the reform package over time,” Thompson said.