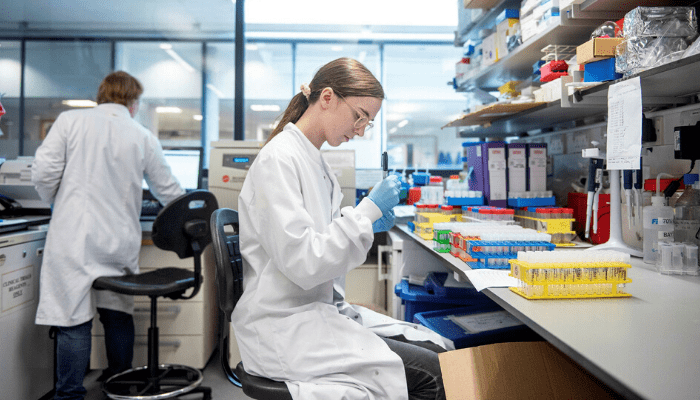 The coronavirus vaccine developed by Oxford university and AstraZeneca has shown promising results in the first phase of its clinical trials.

The eagerly awaited study, published in The Lancet on Monday, showed that the AZD1222 vaccine generated “robust immune responses” and was tolerated by all patients.

The results raise hopes that the inoculation might prevent disease, but experts warned that there was a long way to go to prove its safety and effectiveness.

The trial, which involved 1,077 healthy adults aged between 18 and 55, induced two forms of human immune response — generating both antibodies and T-cells — for at least 56 days.

“The data is fantastic — as good as it could have been at this stage,” said Kate Bingham, chair of the UK government’s Vaccine Taskforce. But she added that encouraging preliminary results did not guarantee success in more extensive trials.

Mene Pangalos, AstraZeneca’s head of biopharmaceuticals R&D, said: “Today’s data increases our confidence that the vaccine will work and allows us to continue our plans to manufacture the vaccine at scale for broad and equitable access around the world.”

All participants had a T-cell response within 14 days of vaccination and 91 per cent developed antibodies within 28 days. That figure increased to 100 per cent after a booster jab. Most coronavirus vaccines are likely to require two doses.

Pascal Soriot, chief executive of AstraZeneca, said: “There is a possibility, an assumption that is more and more supported by recent data, that the T-cell response may help the antibody response and produce more durability to the immune response.

“We’ve worked very hard to scale up the manufacturing,” he added, noting that the company now had capacity to supply 2bn doses at no profit during the pandemic, which it hopes to start distributing before the end of the year.
Phase-one vaccine trials conducted by Moderna of the US induced positive antibody responses, while the vaccines developed by CanSino Biologics and Pfizer and BioNTech also showed good signs of provoking a dual T-cell response, according to new data released on Monday.

On the question of how the Oxford/AstraZeneca trial compares with other vaccines, Mr Soriot said that they had all shown positive results and it would be difficult to directly compare them until they had all been tested in the same lab. “The hope is that we’ll have several vaccines,” he added.

Jonathan Ball, professor of molecular virology at the University of Nottingham, said that, “whilst encouraging, there is still a long way to go before we can herald the arrival of a successful coronavirus vaccine”. He added that it was still unclear whether the level of immunity induced in the trial would protect against infection.
“At the very least a successful vaccine will either have to protect the elderly from serious disease or prevent less vulnerable people from becoming infected and spreading the virus,” he said. “And at the moment, we don’t know which if any of the many vaccine candidates being trialled will achieve that.”

The Oxford vaccine caused more minor side-effects than the control group of patients who received a placebo meningitis jab, but these adverse responses could be reduced by taking paracetamol, according to the paper.
The authors noted that further tests would need to be done as the phase-one trial demonstrated only the efficiency of the vaccine in laboratory conditions, and not during infection in the community.

AZD1222 is now being tested on tens of thousands of people in the UK, US, Brazil and South Africa to discover whether it prevents Covid-19 when compared with placebo.

UK Prime Minister Boris Johnson wrote on Twitter: “A huge well done to our brilliant, world-leading scientists & researchers. There are no guarantees, we’re not there yet & further trials will be necessary — but this is an important step in the right direction.”

AstraZeneca’s share price jumped more than 3 per cent on the news, then fell back to below where it started.
Adam Barker, an analyst at Shore Capital, said that it was “good to see the actual data lived up to the hype”. He cautioned, however, that “the data don’t tell us whether it works or not yet. So it’s a good first step, good to see B- and T-cell responses, but we don’t know if it works yet.”