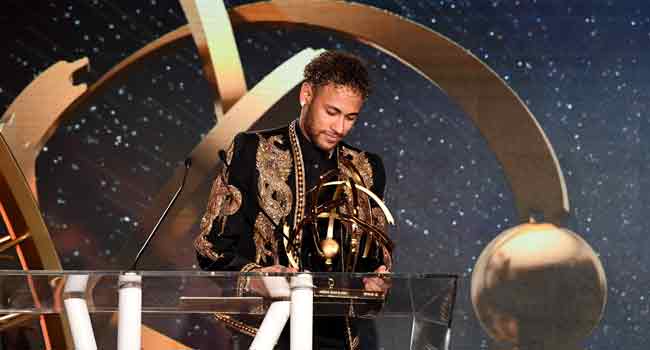 Neymar was named as France’s player of the year at an awards ceremony in Paris on Sunday, and later brushed away questions over his future.

The Paris Saint-Germain superstar took the prize despite missing the last three months of the season due to injury.

The world’s most expensive player scored 19 goals in just 20 league games for PSG before suffering a foot injury in February that required surgery in his native Brazil.

He has not played since, and only returned to France from his homeland at the start of this month, fuelling speculation that he could seek to leave the club after just one season.

“I am very touched and very happy with our season. It is an honour. Without my teammates, I would never have received this award,” said the 26-year-old, who collected the prize from his illustrious compatriot Ronaldo.

Neymar, who joined in PSG’s Ligue 1 title celebrations on Saturday night, refused to discuss his future after collecting his award.

“We talk about these things every time the transfer window comes around. I don’t want to talk about anything at the moment,” he said.

“Everyone knows why I came here, what my objectives are. Right now, my objective is the World Cup, not talking about transfers.

“I spend my whole life, every transfer window, talking about it. It’s a bit annoying.”

Neymar beat two of his PSG teammates to the prize, voted for by his fellow players — Edinson Cavani, Ligue 1’s leading scorer this season with 28 goals, and Kylian Mbappe were also nominees, along with Marseille winger Florian Thauvin.

Neymar was signed from Barcelona for a world-record 222 million euros ($264 million) last August, and helped PSG on their way to a clean sweep of the domestic trophies.

However, his injury appeared to cost Unai Emery’s team dear in their Champions League last-16 tie against Real Madrid — he was unable to play in the second leg, and PSG lost 5-2 on aggregate.

He is hoping to be back to full fitness in time to lead Brazil at the World Cup in Russia, which starts in a month’s time.

Club president Nasser Al-Khelaifi insisted on Saturday that there was no chance Neymar would be leaving.

“I am 2000 percent sure he will stay,” Al-Khelaifi said, rejecting talk of a transfer to Real Madrid.

“The Spanish media have been talking since October. I don’t respond to rumours, I don’t have the time. But I am sure he will be a Paris Saint-Germain player.”

PSG’s dominance of the French game this season was reflected in the awards.

Mbappe was named young player of the year, beating off competition from the Lyon duo of Houssem Aouar and Tanguy Ndombele, and Bordeaux’s Brazilian winger Malcom.

“I have had a good season. I have changed universe. I had to adapt right away because at clubs like PSG you don’t get given the time,” said the 19-year-old Mbappe, who joined PSG from Monaco on a loan deal last August.

That move is set to become permanent this summer for a fee of up to 180 million euros.

Mbappe, who has scored 13 league goals, won the same award last year when he helped Monaco to the title, and so follows Eden Hazard in claiming the young player gong two seasons running.

Emery, who will leave PSG at the end of the season, won the coach of the year award.