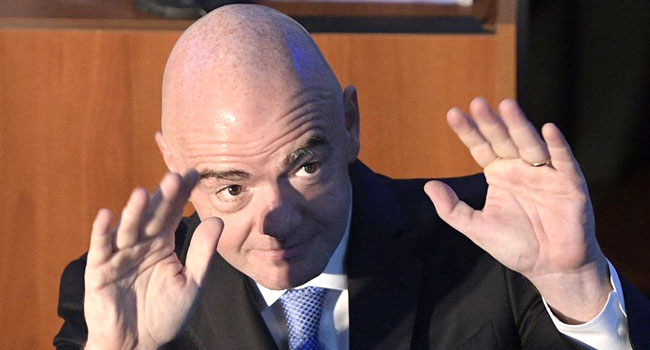 A united response to FIFA’s plans to enlarge the Club World Cup to 24 teams will be the subject of debate on Wednesday at a meeting of football power brokers organised by UEFA.

Ahead of the Europa League final in Lyon, the governing body of European football is holding a meeting of its “Council of UEFA” and FIFA president Gianni Infantino’s plans are the main topic on the agenda.

Many of those participating have already expressed hostility to the plan.

Infantino is pushing to revamp the Club World Cup, boosting it from seven clubs to 24 in a four-year format. At the moment it is played every year.

At the same time, he hopes to launch a biennial league tournament for nations, the Global Nations League.

Infantino says he has an offer of $25 billion over 12 years for the two competitions from a group of investors, which the Financial Times has identified as SoftBank from Japan and the governments of China and Saudi Arabia.

That is allowing FIFA to dangle enormous amounts of cash in front of the biggest clubs.

For the club competition alone the consortium “guarantees minimum revenues of $12 billion for the four editions from 2021 to 2033”, according to a document, which AFP has read, that FIFA presented to seven big European clubs including European Champions Real Madrid, Spanish champions Barcelona and German champions Bayern Munich.

According to the document, 12 of the 24 teams in the competition would be European, four or five from South America, two each from the rest of the Americas, Asia and Africa, leaving the Oceania to battle for the last place with a South American team.

The winners of the four previous Champions Leagues would be guaranteed places.

The European participants could make between $50 million  and $80 million each.

Already some clubs have voiced their support.

Barcelona’s board of directors said the tournament would be  “exciting, dynamic, inclusive and prestigious.”

They added that it would “create a global platform for clubs to contribute to the growth of their brands.”

Emilio Butragueno, Real Madrid’s head of public relations, told his club’s TV station: “We think that for fans it could be a very interesting competition.”

Infantino says he needs agreement soon because the consortium gave FIFA a 60-day deadline and after that the money will vanish and hopes to get approval at the FIFA conference in Moscow in June ahead of the World Cup.

Ceferin is not happy.

“FIFA should not be meeting with only seven federations or clubs and discussing with them things that concern all of European football,” he said in a recent interview.

“I know that at least three of the seven clubs don’t agree with the path that FIFA wants to take.”

“They have invited only the clubs,” the Slovene said on Friday. “So they think only they count.”

Infantino insists that the new format will reduce the number of games the “great players” would play in each four-year cycle, but the leagues are sceptical and object to cramming new competitions into the football calendars.

“FIFA itself has highlighted the international match calendar’s congestion and lack of rest periods for players most in demand,” Premier League chief executive Richard Scumadore told

“To be presented with FIFA’s ‘solution’ as a fait accompli and claim this to be consultation defies all definitions of best practice and good governance,” Scudamore told The Times in London.