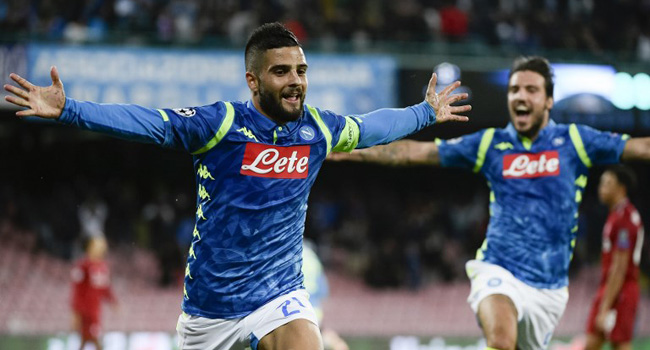 Lorenzo Insigne stuck late as Napoli snatched a 1-0 win over an outclassed Liverpool in a Champions League Group C game the hosts dominated in the Stadio San Paolo on Wednesday.

Carlo Ancelotti’s side had piled the pressure on Liverpool before finally finding a way through on 90 minutes when Jose Callejón broke down the right crossing for Insigne who beat Alisson in the Liverpool goal.

It puts Napoli top of Group C with four points from two games, with Paris Saint-Germain a point behind after thrashing Red Star Belgrade 6-1 earlier.

Liverpool, last year’s runners-up, had been top of the group after their 3-2 win over Paris Saint-Germain two weeks ago with Napoli held 0-0 at Red Star.

But Jurgen Klopp’s side now drop to third.

The visitors never really settled into the game and suffered an injury blow when midfielder Naby Keïta went down early with a suspected muscular problem and was stretchered off in tears.

The Guinean — making his first Champions League appearance for the club — had been the only change in Klopp’s side from last weekend’s draw at Chelsea.

Keita took the place of Jordan Henderson, who came on after the Guinean’s injury after 20 minutes.

Ancelotti oped for a 3-5-2 attack with Nikola Maksimovic coming into the back line.

Captain Marek Hamsik started next to Fabian Ruiz and Allan in midfield, with Arkadiusz Milik preferred to Dries Mertens up front alongside Insigne and Callejon.

Liverpool goalkeeper Alisson had his work cut out on his return to Italy after his move from Roma last summer.

The hosts kept up the pressure after the break with Insigne crossing for Milik, who lashed towards goal on 50 minutes, but Joe Gomez came to the rescue after Alisson spilled the ball.

Gomez again did well to clear a goalbound Callejon effort off the line with Dries Mertens rattling the woodwork with Alisson well beaten with eight minutes to go.

But Insigne finally shook off Virgil van Dijk to score the winner to deafening applause from the 40,000 crowd.

The victory maintained new Napoli coach Ancelotti’s record of having never lost in the Champions League against Liverpool with four wins now and a draw.

Ancelotti’s AC Milan beat Liverpool in the final to lift the title in 2007.

The post Insigne On Target As Napoli Outclass Liverpool In Naples appeared first on Channels Television.