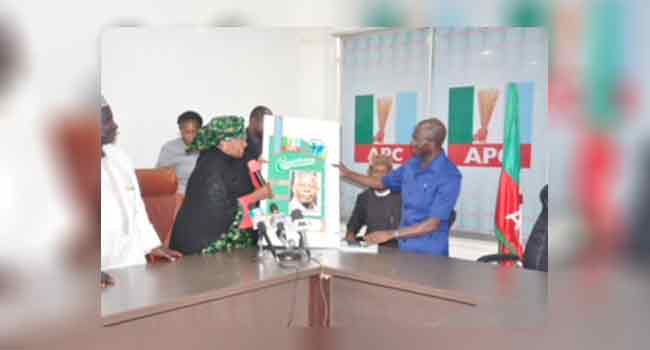 The National Chairman of the All Progressives Congress (APC), Mr Adams Oshiomhole, says the party’s leadership will be fair and just under his watch.

He made the promise when he received two delegations of party leaders from Taraba State on Wednesday, led separately by the Minister for Women Affairs, Senator Aisha Alhassan, and Senator Yusuf Abubakar at the APC National Secretariat in Abuja.

Oshiomhole noted that one of his top priorities is to address the disputes arising from the party’s recent national convention and other congresses.

He informed the leaders that he was awaiting the report of the National Convention Committee chaired by the Jigawa State Governor, Mohammed Abubakar.

The party’s chairman recalled that the governor made commitments to some of the aggrieved parties which the National Working Committee (NWC) would urgently consider upon receipt of the convention committee report.

Appealing to members to commit themselves to the party unity and supremacy, he said, “On our part, we will be guided by the principles of fairness and justice,” adding, “We must work to present a united front ahead of the 2019 general elections. Wherever we have a crack, we will mend it as soon as possible.”

On the party’s plan for Taraba State, Oshiomhole stressed, “The determination to win the governorship election in Taraba and the presidential election is enough incentive for compromise.”

“We won the Taraba governorship election in 2015 but were manoeuvred out. In 2019, those manipulation instruments will not be at their disposal,” he added.

Speaking on behalf of one of the delegations, Senator Yusuf congratulated the former governor on his election as the APC National Chairman.

He stated his confidence in the Oshiomhole-led NWC to resolve the disputes within the party and lead the party to victory in 2019.

The lawmaker said, “We have witnessed with great excitement your flawless and overwhelming affirmation as the APC National Chairman. This unprecedented show of love and respect attest to your long-standing reputation as an honest, fearless and dispassionate leader.”

The post APC Will Be Guided By Principles Of Fairness, Justice – Oshiomhole appeared first on Channels Television.