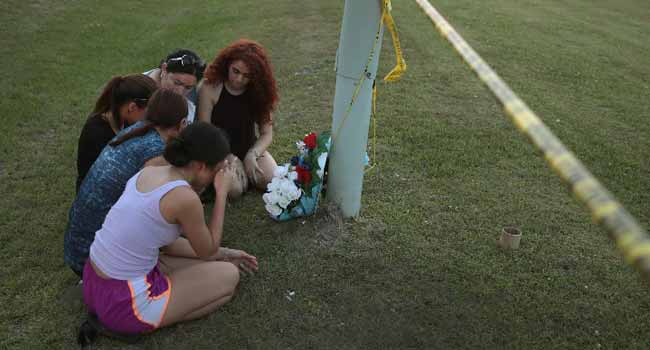 Two officers “did what they could” when a teenager opened fire and killed 10 inside a Texas school, their chief said Saturday, tight-lipped about a probe into the latest US mass shooting.

Friday’s massacre in the rural community of Santa Fe wounded 13 more, including a school police officer who is in critical condition.

Dimitrios Pagourtzis, a 17-year-old student at the same Santa Fe High School, is being held on two charges: aggravated assault to a public servant and capital murder, which means he could face the death penalty.

The FBI raised the number of wounded to 13, from 10 earlier.

Walter Braun, chief of the Sante Fe Independent School District police, told reporters that one of his officers was in a critical but stable condition.

He and another officer had “engaged” the shooter, Braun said.

“We drill all of the time with the students and staff and they’re prepared to go into action. That was reflected by the two officers that engaged him right away,” Braun said, declining to give further details.

“Our officers went in there and did what they could.”

Braun refused to discuss any investigative matters, such as how many rounds his officers may have fired, deferring to the FBI and Texas Rangers, a statewide law enforcement agency. The two agencies are leading the probe.

Galveston County Judge Mark Henry, who found “probable cause” to deny bond for the suspect Friday, told reporters that the wounded school officer “ran toward danger… He’s a hero in my book.”

Henry noted that the suspect “said in his statement he acted alone,” and the case will go before another judge on Monday.

The gunman apparently carried out the attack with a shotgun and a .38 revolver that were legally owned by his father, according to Governor Greg Abbott.

Early Saturday, FBI agents were seen at a blue trailer home believed to be connected to the suspect.

The school remained sealed by police tape and an official said all campuses in the district will be closed Monday and Tuesday.

Officers escorted students and staff back onto school property, but only to collect valuables, as people stopped to leave flowers outside.

Among the visitors was Allie Sybert, 12, who arrived with her parents and little sister.

“You just feel so stressed to go to school,” Sybert, of Lake Jackson, Texas, told AFP.

“I just don’t understand why anybody would want to do that to people,” she said, expressing hope schools would consider boosting security.

Grief counselors and comfort dogs were on hand at a local church where the Red Cross opened a family assistance center for those affected by the shooting.

The New York Times cited an affidavit written by one investigator as saying the suspect had confessed and said he spared “students he did like so he could have his story told.”

A survivor, first-year student Evan San Miguel, said he was in art class when the gunman burst in and yelled “Surprise!”

Then the shooting started.

San Miguel and fellow student Bailee Sobnosky were among hundreds at a vigil Friday night in the community near Houston.

Sobnosky said she did not know the shooter, but had seen him around school. “He seemed like a nice kid,” she said, although she believed he did not have many friends.

US media have identified all the victims, who included two teachers and an exchange student from Pakistan.

J.J. Watt, a defensive end with the National Football League’s Houston Texans, has told authorities he will pay the funeral expenses of those killed, NFL officials confirmed.

“Right now, this is the time for grief,” Congressman Randy Weber told reporters.

He bristled at suggestions that maybe it would be safer if guns were not so readily available.

“Don’t forget what state you’re standing in. There’s more guns in Texas than in any the other states. And if I’ve got my facts right, my district has more concealed handgun licenses than any other,” he said.

Calls for gun reform are unlikely to resonate in the gun rights bastion of Texas after the Sante Fe murders, as they did after a school massacre in Florida three months ago.

In response to the Florida killings, President Donald Trump’s administration said it would step up aid to states that want to arm school employees, a move that has little support from educators.

Many US schools already are staffed by armed officers such as those who responded in Santa Fe.

The post ‘Officers Did What They Could In Texas Killings’ appeared first on Channels Television.